The Rugby Advertiser stated on Saturday, July 21st 1917 that news had been received that Mr A J White, late of 70 Murray Road, Rugby was killed on active service in France on June 30th. He was serving with the Notts and Derbyshire Regiment, to which he was transferred from The South Notts Hussars.

He was an Old Murrayian and, after spending some time in the building trade, entered the service of the Prudential Assurance Company and some three years later was promoted to Assistant Superintendent at Stamford. 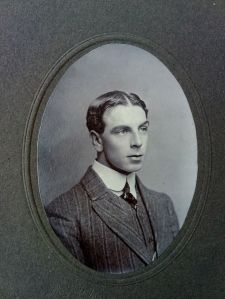 Albert (Bert) James White was the eldest son of the seven children of James and Elizabeth White. Born in 1886, Bert lived with his wife Ethel, and 22 months old son, Norman, at 8 Wyvern Terrace, Melton Mowbray and was 31 at the time of his death.

Colin White, Bert’s nephew, who lives in Braunston, and who prepared this article, has a collection of letters that were exchanged between his father, Frank, and Bert during the six months leading up to Bert’s death.

At the time, Frank was in the Royal Army Medical Corps at Felixstowe. Colin also has a collection of photographs of Bert taken before and during the war when he was being trained in the cavalry. 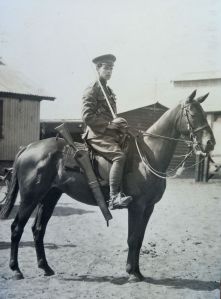 After enlisting, Bert soon found himself being transferred from the cavalry and on a long journey to the front line in France. One of his letters dated 21st January 1917 reads: “We arrived in France on the 4th, stopped 3 nights at base camp and, issued with more kit, then moved by train for 27 hours – with stops of course; then a night at a rest camp and onto here next day. Well laddy we are right up the line here at a training base a few miles behind the fighting line! We can hear the big guns day and night. You see Frank we, the 6th Sherwood Forresters are defending this part of the fighting line. We are in a village and billeted in old barns. It’s a very rough life out here with the weather and up to our nests in mud and slush and we have to get cleaned up for all parades. I don’t at all like the Infantry after the Cavalry I can tell you, but it’s too late now to transfer to the Engineers so I, like the other lads, must stick at it and make the best of it.”

His letter continues and ends: “Bye bye old man and all the bests of luck to you. Fondest love from your loving brother, Bert xx”

There followed regular exchanges during the next five months, including on the 7th June: “In army rest camp with a huge carbuncle on my neck and am run down, having been ordered out of line and sent to hospital over night and had a nice car ride to here the following day. Neck OK but feeling very weak. Very rough time this last fortnight.”

Then finally on 26th June a formal “Field Service Card” from Bert: “I am quite well – letter follows at first opportunity.”

Then a letter dated 5th July to Bert’s wife, Ethel, telling her that Bert was hit by a shell splinter, from a trench mortar, late on the night of 30th June and died almost immediately, stating “Ever since he joined us from the cavalry he has done splendidly, always ready, always brave, he was some of those men whom one could trust to go anywhere and do anything.”

This was followed by a letter from his pal saying: “He was doing his turn on sentry duty with another pal at about 11.00 on the night of the 30th – a shell dropped close to them, catching Bert – he died within 10 minutes. I was sent for at once but on my arrival I found that nothing on earth could save him. I will send on to you his pocket book, etc by registered post. Yours truly A Weston.”