Herbert was born in Long Lawford in 1897. His father was Tom Reynolds, a Bricklayer and Emma Julia (nee Burnham). They had married in Church Lawford parish church in 30th August 1897. Herbert was the youngest of four sons. Emma died two years later in 1899, at the age of 33. Tom remarried in 1900 to Maria Bagnall. Together they had three more children, two girls and then another boy.

In 1901 the family were living in Campbell Street, New Bilton. By 1911 they had moved to 18 Dunchurch Road. Tom was a Builder/Bricklayer working on his own account and 14 year old Herbert was an office boy.

Herbert joined the Rifle Brigade, (number S/4594) and landed in France on 21st July 1915. If he is the H Reynolds mentioned as a member of the Wesleyan Sunday School, he volunteered in August 1914.

On 16th October 1915, the Rugby Advertiser printed a letter from Corporal Herbert Reynolds:

THE BRITISH ADVANCE.
GRAPHICALLY DESCRIBED BY A RUGBY SOLDIER.

Corpl Herbert Reynolds, of the Rifle Brigade, son of Mr T Reynolds, of Dunchurch Road, Rugby, in a letter to Mr J W Faulkner, captain of the 2nd Rugby Company of the Boys’ Brigade—in which the writer was formerly Colour-Sergeant—gives a realistic account of the recent capture of German trenches by the British. He says :—

“ On Friday night we went into the assembly trenches, 100 yards behind the fire trench, and lay there all the night. It rained hard all night, so it was a bit uncomfortable crawling around in the mud. At about four o’clock the ‘ fun ’ started. We had to keep our heads pretty low to escape the shells. At six o’clock it really began, The earth trembled and shook, and up went a mine and half of the enemy trench ! My word, it did shift some earth ! Immediately the bombardment started. It was hell itself—one continual burst of high explosives and shrapnel. Then we threw out a smoke screen, and the “ Scotties ” and the Indians charged, capturing the trenches easily. Next our turn came to go over. We lined the fire trench and watched our Captain for the order. He jumped up, waved his stick, ‘Come on,’ he said, and as one man we got over the parapet to face a perfect hell of rifle, machine-gun, and shrapnel fire. At the foot of our barbed wire we lay down in extended order and waited for the next advance. Up and on again ! Down again ! The fire is terrible and we must advance by short 15 yards rushes. The German trench is about 300 yards distant. When we get within about 30 yards we crawl, and then finish up with a rush, and into the trench.

“It is in the hands of our troops, but all the time we are subjected to a terrible enfilade fire. We held the trench for about eight hours, but we could not get our bombs across, so had to give ground before their bombing from the flanks. Men were being blown to pieces, and we were powerless. We hung on to the last and then got the order to retire. You cannot possibly imagine what the shell fire was like, but, believe me, when once you’ve seen in it, well, you are not keen to go again for a bit. The return journey was worse than the outward one, and how I came back whole I don’t know. Just outside the enemy’s trench a piece of shell caught me in the back and ripped a hole in my trousers and pants. It knocked me flying, but it only bruised me a bit. We came back all right though, and lined the support trenches. Then it rained in torrents and we got wet through to the skin. When the news came that we were to go out that night, you can bet we were thankful. The communication trench was knee-deep in water, but we did not mind that so long as every sight of that terrible scene of carnage was left behind.”

Herbert was reported “Killed in Action” on 5th September 1916. His name is listed on the Thiepval Memorial. He is also remembered on the BTH Memorial and on the family grave in Clifton Road Cemetery. 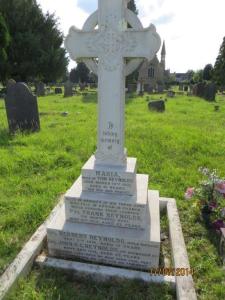 Herbert’s brother Frank, three years older, died in 1915 and another brother John was to die in November 1916. Two cousins also died in the war.