Wilfred Cleaver Hunter was born in Rugby in 1891. He was the third son of Thomas Hunter and his wife Emily Cleaver, who married in 1886. At the time of his birth the family were living at 94 Railway Terrace, Rugby and his father is listed as a Railway Wagon Builder (employer). His grandfather had founded the Thomas Hunter Wagon Works in Mill Road twenty years earlier.

In the 1911 census the family was living at Elmhurst, in Hillmorton Road. Wilfred was aged 20 and described as a Filament Maker, Electric lamp maker. 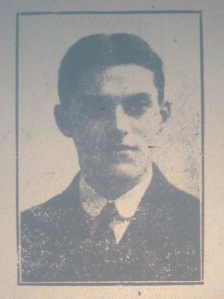 A report in the  Rugby Advertiser of 8th Jan 1916 gives an account of his life and death:

Second Lieut Wilfred Hunter was 25 years of age, and was the third son of Alderman Hunter. He and three of his brothers enlisted on the outbreak of war, and all four obtained commissions. He was a very bright and promising young man, and many outside the family circle will be grieved to know of his death.

He first enlisted as a gunner in the 4th South Midland Howitzer Brigade, and after seven months’ service entered the Royal Military Academy at Woolwich.

On October 27th last year he was gazetted to the Royal Garrison Artillery, and left for France on December 10th, being killed in action 20 days later.

Lieut. Hunter spent some days at Havre before going to the front, so must have met with his death very soon after his arrival at the actual scene of the war.

Alderman and Mrs Hunter, of Elmhurst, Hillmorton Road, Rugby received the news of his death on New Year’s Day.

He was killed by a shell which burst in the courtyard of the farm where he was billeted. A fragment struck him in the throat and he died almost at once. He was buried at the Divisional Cemetery at West-Vlaanderen, near Ypres

He is also remembered at his parents grave in Clifton Road Cemetery:
Also of WILFRED the dearly loved son of THOMAS & EMILY HUNTER who was killed at Ypres Dec 29th 1915 aged 24 years.
“Come to me saith one and coming, be at rest.”