In 1901, Horace was only five years old, and the family were living in Coventry. By 1911, the family had moved to 106, Craven Road, Rugby and Horace, now 15, was working as a ‘turner in iron industry’ ‘engineering’.   It is assumed that he was already working at BTH, where he is known to have been working in the BTH Tool Room prior to enlisting.

He joined up as a rifleman, number Y/531, in the 9th Bn. Kings Royal Rifle Corps.

The 9th (Service) Battalion of the Kings Royal Rifle Corps was formed at Winchester in August 1914 as part of K1 and came under orders of 42nd Brigade in 14th (Light) Division. They moved to Aldershot, going on to Petworth in November and in February 1915 returned to Aldershot.

The 9th Bn. landed at Boulogne on 20 May 1915, although it seems that Horace did not arrive until slightly later, as his medal card showed that he arrived in France on 13 August 1915.

The Battalion had fought in the action at Hooge Crater, being in the first Division to be attacked by flamethrowers. ‘The loss of the Battalion in this short action was 17 officers and 333 other ranks. … The Battalion took no further part in any important fighting until the Battle of Loos on September 25th, where they again experienced very hard fighting, lost heavily, but won further credit for their gallant services.’[1]

On 25 September 1915, the 9th Bn. were in action in one of the main diversions for the Battle of Loos, the Second Attack on Bellevarde [see separate article in Rugby Remembers]. Bellevarde Farm was only about 500m north of Hooge. On this day, another eight Rugby men, from the 5th Battalion of the Oxford and Buckinghamshire Light Infantry, were killed in action, with none having a known grave. The 9th Kings Royal Rifle Corps were in action to the left of the 5th Ox. and Bucks.

Before the date of his final action, Horace was promoted from Rifleman to acting Corporal, but was reported missing, presumed killed, on the first day of the attack on Bellevarde Farm, on 25 September 1915.

Horace was originally buried as an ‘unknown soldier’, probably near where he fell as the given Map Reference: 28.I.11.b.15.49. was near Railway Wood, some 500 yards north-west of Bellevarde Farm. His unnamed body was recovered after the war and he was identified by his ‘titles and boots, stmp. [stamped] 531’, and that part of his boot was ‘forwarded to base’. 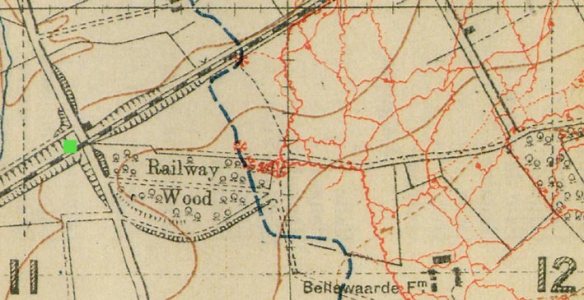 Above: Map with 25 yard square I.11.b.15.45 (marked in green), locating the small cemetery. The site of Horace’s exhumation, 28.I.11.b.15.49, would be a few yards immediately north of the green square on the map, and thus probably part of that same small battlefield cemetery in the disused railway cutting.

The marked square on the trench map was the location of a small battlefield cemetery to the west of Railway Wood in the middle of the disused railway cutting – it is today the route of the N37 Zuiderring road from Ypres to Zonnebeke, near where it crosses Begijnenbosstraat.

Several soldiers were buried initially in this cemetery, including, notably, the alleged youngest casualty of WWI, the fourteen year old John Condon, who was killed on 24 May 1915, and who was reburied in Poelcapelle Cemetery, where his is the best known and most visited grave of any soldier who died in the Great War, although some researchers now suggests that Condon was actually 20 years old, and indeed it is argued that his body may have been misidentified and a completely different soldier, Patrick Fitzsimmons, who had the same number in another regiment, may well be buried there![2]

Horace Powell was also reburied in Poelcapelle British Cemetery, in Grave Reference: LIV. F. 7. This cemetery is located some ten miles north of Bellewaarde, and was built after the war, and many individual burials and the burials in several smaller cemeteries were concentrated into the Poelcapelle British Cemetery, which is located 10 Kms north-east of Ieper town centre on the Brugseweg (N313), a road connecting Ieper to Brugge in west-Vlaanderen.

Horace was awarded the British and Victory medals and the 1915 Star.