Wilfred Page’s birth was registered in the third quarter of 1894 in Rugby. He was baptised on 9 December 1894 at St Andrews Church.   Wilfred’s parents were John Page born 1853 in Norton, Northants and Emma born 1854, in Northampton. Father John was a Railway Engine Driver and the family lived at 43 Cambridge Street in both the 1901 and 1911 censuses. Wilfred was described as a Winder at BTH, in the 1911 census.

Wilfred Page enlisted with the 5th Battalion of the Oxfordshire and Buckinghamshire Light Infantry, Regimental number 11075 at the end of August 1914. Formed at Oxford as part of K1 and placed under orders of 42nd Brigade in 14th (Light) Division they landed on 21 May 1915 at Boulogne. 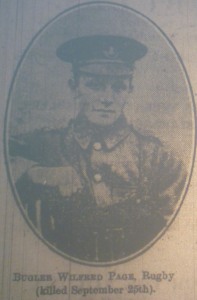 Last week Mr J Page of 43 Cambridge Street received official information that his youngest son, Bugler Wilfred Page, of the 5th Oxon and Bucks Light Infantry, was killed in action on September 25. Bugler Page, who was only 20 years of age, was an old Murrayian and was formerly a member of the lst Rugby Co Boys’ Brigade and also of the BTH Boys Scouts.   He joined the Army at the end of August 1914, at which time he was employed in the L & N W Ry erecting shop. As a mark of respect the flag was flown at half mast from the pole at the erecting shop. Another son of Mr Page is on a torpedo boat operating in the Mediterranean.

Wilfred Page is remembered on Panel 37 and 39 of Ypres Menin Gate Memorial and Grave K678 in Clifton Cemetery and on the Rugby War Memorial.