Reginald Clowes was the fifth child of Leonard and Annie Clowes of 40, Windsor Street, Rugby.  He was born in Crewe Cheshire in 1894. In the 1911 census he had 5 sisters and 1 brother, the other sibling presumably older and away from home is not mentioned.  Also in the 1911 census his occupation is listed as fitter with railway company. 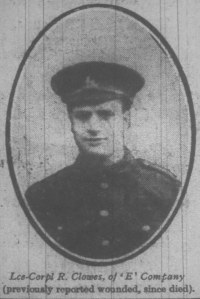 He enlisted in Rugby, Warwickshire with the Royal Warwickshire Regiment 7th battalion.  His service no. was 1402 and his rank was lance corporal.  He was wounded while fighting in the trenches in France on 27th May 1915 and died on the 2nd June.  Medals that he was awarded were the British War Medal + Victory Medal and 1914-15 Star.

He was buried at Bailleul Communal Cemetery Extension in France. The words on his headstone read:

Died of Wounds
Tranquil you Lie
Your Knightly Virtue Proved